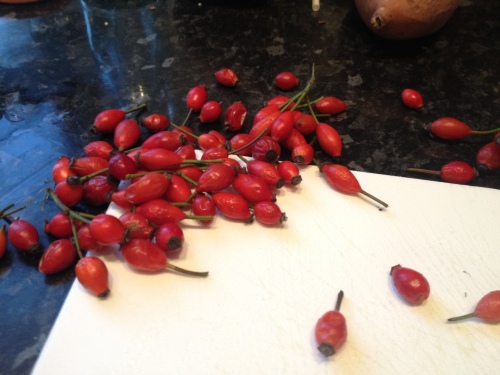 After a lot of research into Rosehips, sourcing, preparing, storing etc, i feel like i may have missed the best time to gather them (generally it’s around Autumn). However, on our walk yesterday we spotted numerous bushels and i couldn’t resist. Coincidentally, Callum had a random plastic bag in his pocket- fate? So we’re gathered a meagre couple of handfuls and brought them home. In the kitchen i had three old Pears and hey presto- jam was on the cards! After topping/tailing/deseeding the Rosehips (which turned out to be a pretty horrendous task in all honesty) i finally had the pulp of some worthy jam fodder. But still i was suspicious as to the taste of these potentially-past-their-best gems, so i did what most(?) dubious chefs would do- threw in half a teaspoon of Chilli flakes and hoped for the best… 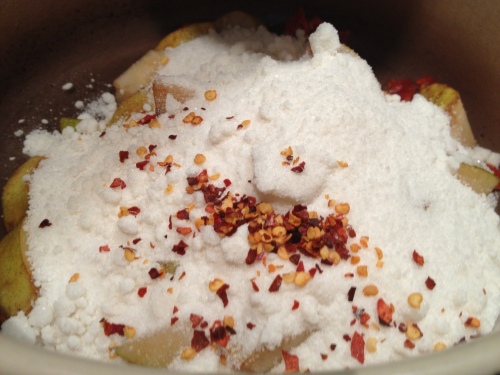 And you know what? I’m really happy with the results. A really subtle tasting conserve, theres the juiciness of the pears, the slight warmth from the chilli and a beautiful aftertaste of rosehip which stands out above the other flavours in just the right amount. Rosehips are also fantastically good for you- they have more Vitamin C than citrus fruit! I’m already thinking of spooning it over porridge, on freshly toasted bread, stirred into stewed fruit, rippled into ice cream… 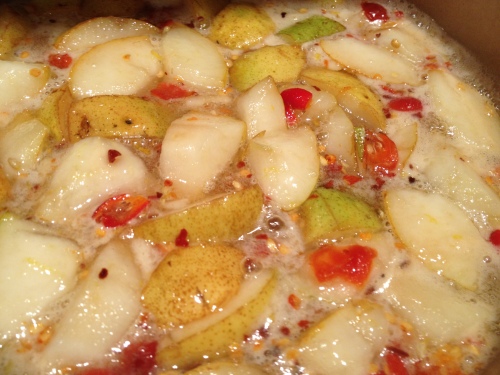